A regenerative brake is an energy recovery mechanism which slows a vehicle by converting its kinetic energy into another form, which can be either used immediately or stored until needed. This contrasts with conventional braking systems, where the excess kinetic energy is converted to heat by friction in the brake linings and therefore wasted.

The most common form of regenerative brake involves using an electric motor as an electric generator. In electric railways the generated electricity is fed back into the supply system, whereas in battery electric and hybrid electric vehicles, the energy is stored in a battery or bank of capacitors for later use. Energy may also be stored via pneumatics, hydraulics or the kinetic energy of a rotating flywheel.

Every time you step on your car's brakes, you're wasting energy. Physics tells us that energy can not be destroyed. So when your car slows down, the kinetic energy that was propelling it forward has to go somewhere. Most of it simply dissipates as heat and becomes useless. That energy, which could have been used to do work, is essentially wasted.

Is there anything that you, the driver, can do to stop wasting this energy? Not really. In most cars it's the inevitable byproduct of braking and there's no way you can drive a car without occasionally hitting the brakes. But automotive engineers have given this problem a lot of thought and have come up with a kind of braking system that can recapture much of the car's kinetic energy and convert it into electricity, so that it can be used to recharge the car's batteries. This system is called regenerative braking. 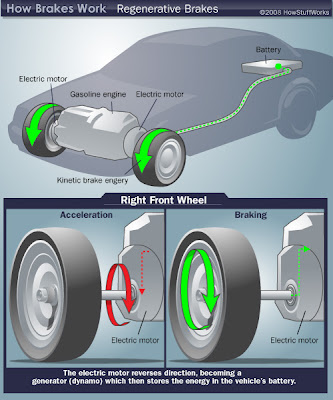 In a tr­aditional braking system, brake pads produce friction with the brake rotors to slow or stop the vehicle. Additional friction is produced between the slowed wheels and the surface of the road. This friction is what turns the car's kinetic energy into heat. With regenerative brakes, on the other hand, the system that drives the vehicle does the majority of the braking. When the driver steps on the brake pedal of an electric or hybrid vehicle, these types of brakes put the vehicle's electric motor into reverse mode, causing it to run backwards, thus slowing the car's wheels. While running backwards, the motor also acts as an electric generator, producing electricity that's then fed into the vehicle's batteries. These types of brakes work better at certain speeds than at others. In fact, they're most effective in stop-and-go driving situations. However, hybrids and fully electric cars also have friction brakes, as a kind of back-up system in situations where regenerative braking simply won't supply enough stopping power. In these instances, it’s important for drivers to be aware of the fact that the brake pedal might respond differently to pressure. The pedal will sometimes depress farther towards the floor than it normally does and this sensation can cause momentary panic in drivers.

Vehicles driven by electric motors use the motor as a generator when using regenerative braking: it is operated as a generator during braking and its output is supplied to an electrical load; the transfer of energy to the load provides the braking effect.

Regenerative braking is used on hybrid gas/electric automobiles to recoup some of the energy lost during stopping. This energy is saved in a storage battery and used later to power the motor whenever the car is in electric mode

Regenerative braking has been in extensive use on railways for many decades. The Baku-Tbilisi-Batumi railway (Transcaucasian railway or Georgian railway) started utilizing regenerative braking in the early 1930's. This was especially effective on the steep and dangerous Surami Pass. In Scandinavia the Kiruna to Narvik railway carries iron ore from the mines in Kiruna in the north of Sweden down to the port of Narvik in Norway to this day. The rail cars are full of thousands of tons of iron ore on the way down to Narvik, and these trains generate large amounts of electricity by their regenerative braking. From Riksgränsen on the national border to the Port of Narvik, the trains use only a fifth of the power they regenerate. The regenerated energy is sufficient to power the empty trains back up to the national border . Any excess energy from the railway is pumped into the power grid to supply homes and businesses in the region, and the railway is a net generator of electricity.

An Energy Regeneration Brake was developed in 1967 for the AMC Amitron. This was a completely battery powered urban concept car whose batteries were recharged by regenerative braking, thus increasing the range of the automobile.

Many modern hybrid and electric vehicles use this technique to extend the range of the battery pack. Examples include the Toyota Prius, Honda Insight, the Vectrix electric maxi-scooter, and the Chevrolet Volt.

For instance a KERS using a compressed air system for a vehicle installed with a rotary sliding vane engine, a compressor, a combustion chamber and a motor may work as follows: The braking may be achieved by connecting the rotor of the compressor to a wheel and braking rotation of the rotor. Then the rotary motion of the compressor's rotor is used to generate compressed air, which is then stored in the surge tank to be utilized further.

Reportedly, BMW has initiated work and is supposed to use the technology in the 2009 Formula One season. It is additionally experimenting with using individual components such as supercapacitors and lithium ion batteries. Other car makers are soon to follow suit.

From a sport as popular as F1, that attracts an audience of 50 million people who completely follow it and over 300 million who catch some part of it, the world might be in for some breakthrough environment friendly technologies as they percolate into everyday transport. 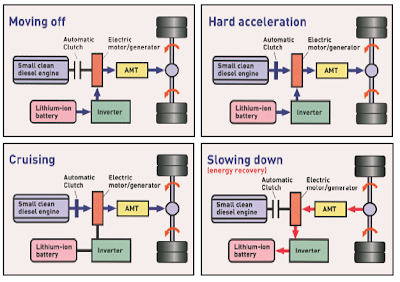 Background
Aerodynamic drag and weight:
A bicycle has relatively high aerodynamic drag and low mass compared to cars. A typical electric bicycle has a drag coefficient of 0.9 and a weight of 25(bike)+30(elec)+180(rider)=235lbs. A Toyota Prius has a drag coefficient of 0.26 and a curb weight of 2765 lbs. Effectively, the bicycle produces 3 times the drag and is a tenth the weight of a car. This higher aerodynamic drag consumes energy whether we are climbing hills or just pedalling along a flat and with our reduced weight electric bicycle momentum can easily be changed with relatively small braking power.

Battery recharge rate:
The other major issue surround regenerative braking is battery recharge rate. The rate energy can be absorbed by the battery is much lower than the rate it can be discharged. A typical NiMh or Li-Ion battery can be charged at 1/10th of it's discharge rate (Note, for new Nano-Li-P04 batteries this rate is much higher). This means, for a typical 20A 36V system like the Crystalyte Cannon only 2A could go back into the battery on a downhill. Even if the power recharge rate were higher, lets say 5A, only 1/4 of the energy of discharged (under ideal conditions) would be reaching the battery pack.

To better summarize the effect this

has on electric bicycle regeneration imagine an electric bicycle climbing an 8% grade at 15mph using 20A @ 36V or 720W of power. Let's say, conversion losses from controller, battery, and motor are about 20%, so you are actually only getting 80% of your total energy output to move you forward - this equals about 575W. At 15mph, the bicycle is also overcoming about 125W of rolling resistance and 150W of aerodynamic drag - leaving about 300W for hill climbing.

Now, imagine you are coming back down the same hill with regeneration turned on full (approximately 5A @ 36V or 180W). This slows the bike substantially, removing more than half of the acceleration due to gravity, which means you'll be accelerating down the hill much slower than normal. How slow?
If it took 300W to climb the hill and over 180W is being converted into energy for the battery, it is safe to assume you would lose about half your acceleration coming down the hill. In our example we can assume a 19mph descent, instead of about 35mph without regeneration. Assuming a high efficiency on recharge (let's say 50%), we'd be getting only 90W back to the battery on the way down the hill and only have 75% the time to charge as we did to discharge.
This means, the regeneration downhill only produces 90W/720W * 100 = 12.5% of the energy used to get up. Plus, all the fun of coasting fast downhill is gone ...
At a conversion rate of only 12.5% regenerative braking is a poor way to recover energy coming down the hill and far less efficient than coasting, which essentially suffers from no conversion losses. So instead of regeneration, you could coast down a hill fast and use the speed to help you coast right up the next hill.

Furthermore, if you are interested in extending your range, simply bring a second battery for close to a 100% incrase in range (much higher than 12.5%) at a much lower cost, only $349 for a NiMh battery vs. $500 or more for a system with regeneration. While you'll be carrying approximately 14 lbs. more you'll have the flexibility to leave a battery to recharge while continuing ride or you can pack up both batteries for a long trip. If you're worried about the extra weight of an additional battery consider it doesn't substantially increase your aerodynamic drag, won't substantially increase your rolling resistance and increases your hill climbing power requirement by a mere 21W (on an 8% grade). In fact your total additional power requirement would be only 29W, which only increases power consumption by 4%. That leaves you 96% more power.
Posted by )-(@r$]-[!t at 4:47 AM